I can: Describe what the difference is between a natural hazard and a disaster.

What is a disaster?

A disaster occurs when a community is unable to protect itself from the impact of a hazard event and there is widespread damage to property, loss of life or injuries.

This can be represented in a disaster equation:

What is a natural hazard?

Hazards are characterized by location, intensity or magnitude, frequency and probability. Natural hazards are predominantly associated with natural processes and phenomena. Natural hazards such as storms, floods and bushfires don’t inevitably lead to a disaster. A disaster only occurs when a natural hazard impacts upon a vulnerable community.

Hazards do not impact everyone equally. Some people and communities are more vulnerable to hazard impacts than others. People can be vulnerable if:

Vocabulary and concept cards: Use this list to develop students understanding of key concepts and vocabulary in this lesson.

Collect students homework and encourage them to share the disaster story they recorded. Use these prompt questions:

2
How a natural hazard becomes a disaster

Students view the natural hazards video and then complete the quiz.

1. What is a natural hazard?

Answer:  An event of natural forces such as a flood or an earthquake.

3. What makes someone vulnerable to a disaster?

Answer: Risk factors that increase the likelihood of someone being injured or killed.

4. Could you have a disaster without humans being impacted?

Answer: No, without humans they are just natural hazards.

5. What is an example of hazard vulnerability?

Answer: Both of the above.

6. Can humans influence the impacts of a disaster?

Answer: Yes, they can manage their risks and become less vulnerable.

Students in groups or pairs view digital stories about the Grantham floods or the 2009 Black Saturday bushfires and respond to a series of questions about these significant historical disaster events.

Depending on the hazard most likely to impact your area, select either a flood or bushfire disaster.

On 9th and 10th of January 2011, heavy rainfall caused flash flooding to occur across parts of Queensland resulting in 35 fatalities and widespread damage to property. Grantham, Lockyer Valley and Toowoomba were severely impacted. Due to landslides caused by flooding, and water blocking the Warrego highway, the Lockyer Valley became isolated; police and emergency services were no longer able to access the area. Excessive fog and rain prevented helicopters flying overhead during the emergency.

Residents of these areas received no warning, unlike the larger towns of Brisbane and Ipswich. The Tsunami like force of the flood was unlike anything that could have been anticipated. 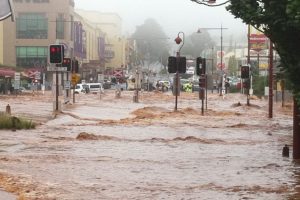 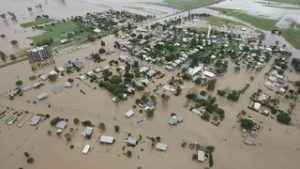 The town of Grantham after the 2011 flood.

Of the 35 people who died as a result of the 2011 Queensland floods, 21 deaths occurred in the Toowoomba and Lockyer Valley area.

The community felt a false sense of security after the construction of the Wivenhoe dam in 1974; therefore many homes and businesses had been built on floodplains. The dam was designed to lessen the risk of such disasters but could never have completely eliminated the risk. Due to unprecedented rainfall over this period, the dam was unable to hold the massive volume of water.

I was complacent and thought we were safe. I thought there would never be a bigger flood … The attitude that “it will never happen” is no longer an option. – Mr Keep

Residents of Grantham and Lockyer Valley received no flood warnings, news of the disaster only spread by word of mouth if it was received at all. Other people were only alerted to the danger when it became visible.

Many people in the community found it difficult to believe their neighbors who were spreading the word of the floods imminent threat.

I was told to get out of Grantham because there was a big wall of water coming and that Grantham was going to go under, I found it difficult to believe that water in the Lockyer Valley could reach that height. – Mr Warburton

People’s homes were rapidly inundated with water which quickly rose to rooftops, washing away cars, equipment as well as sheds and some houses. Most residents had no time or opportunity to evacuate once they became aware of the dangers. They were also unaware how quickly and dramatically the flood waters would rise, eventually reaching rooftops.

Some people attempted to travel through flood waters in vehicles.

The Perry family became stranded in their car as flood waters rose. They managed to climb out of the windows and onto the roof of the car at the last minute. Channel 7 helicopters spotted the family but by the time they returned to rescue them the car had disappeared. The family members were found nearby clinging to tree branches and their 9 year old son on top of a floating cattle feeder. Unfortunately one family member was swept away.

The community is now more aware of the flood risk to their area and the factors that make them vulnerable.

Don’t be complacent about the risk of natural disasters which strike suddenly. Don’t expect warning. Don’t rely on anyone to save you. Be prepared to protect your own family. – Mr Keep

Years later, many of the homes were rebuilt on higher ground nearby to avoid future floods impacts.

Answer these 3 questions in pairs or as a class discuss:

The fire danger weather in Victoria on Black Saturday was the worst on record. By mid-afternoon, hot north- westerly winds were blowing at 125km/h and temperatures in Melbourne had peaked at 46.4°C. On the back of a 12 year drought, the vegetation was tinder dry and once fires had started there was very little the fire services could to do to contain them.

By Sunday morning, 143 people had died and over 2000 houses had been destroyed. This was the worst bushfire disaster Australia had ever seen.

While the Black Saturday bushfires were the most extreme on record, it is important to understand the role that ‘human factors’ played in the disaster. By listening to the stories of survivors, we can learn a lot about what made people vulnerable to the impacts of the fires.

In the lead up to Black Saturday, people were warned that the fire danger was extremely high. On the Friday evening, the Premier John Brumby had given Victorians a stark warning. Appearing on the nightly news bulletin, he said:

“Tomorrow is going to be worst day in the history of the State… I can’t stress this enough, I know that the chief fire officer has been out and he said it will be as bad as you can get and he’s not exaggerating.”

However, many people didn’t see this message as applying to them. They just didn’t think they could ever be affected by bushfire.

I didn’t really think about it…I mean, I thought about it, not for ourselves, but to the point of other people, ‘cause I know people that live in fire danger areas but certainly didn’t think a fire would come through here. – Narre Warren South

Many people hadn’t done anything to prepare their property for bushfire. For some people, it hadn’t been a major priority. They may have mowed the lawn, but they did this to keep the property neat and tidy, not to reduce the fire risk.

I hadn’t taken any measures or anything. I mean, all I did was basically keep the grass cut all the time…Not because of bushfire reasons, only because I wanted it neat. – Flowerdale

Black Saturday was Victoria’s hottest day on record. This meant that many people were trying to keep cool in the air-conditioned comfort of their homes. To keep the house cool, some people had also drawn the curtains, so they weren’t able see or hear any signs of an approaching fire. They were completely unaware of what was happening around them.

For people who were monitoring the fire threat on the TV or radio, a lack of up-to-date information prevented access to advanced warnings.

For some people, leaving just wasn’t possible. By the time they’d become aware of the fire, it was too late to try and escape. Some of these people made the dangerous decision to shelter in bathrooms and this caused of a high number of fatalities. Perhaps they thought the bathroom would be safe because there is water in there, but the bathroom is probably the most dangerous place you could go.

Many people decided to stay and defend their properties and many were successful. But others weren’t as prepared as they needed to be. Some people were relying on simple plastic garden hoses that melted in the heat.

Once the fire front went through, the wind was still blowing. We realised that our pumps and hoses and everything had melted and we just used metal buckets with a mop. – Hazelwood South

Black Saturday reminded a whole new generation of the dangers of bushfires.

Answer these 3 questions in pairs/group or as a class discuss:

Recap on the lesson with reference to the disaster equation:

One way a natural hazard can impact a person or community is…?